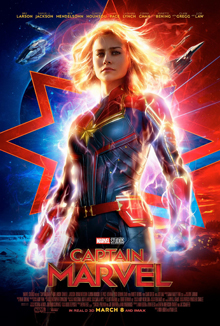 Captain Marvel is the twenty-first Marvel Cinematic Universe movie set in 1995. The story follows Carol Danvers as she becomes Captain Marvel when Earth is caught in a conflict between two alien worlds. For those who have watched most, if not all of the MCU movies Captain Marvel must be watched before Avengers: Endgame as it set up Captain Marvel for her potential role in the future movies.

Before going into the my thoughts and feelings about the movie, Captain Marvel is not the best MCU movie that we have gotten but it is nowhere near the worst. The movie starts out set in space and just drops the audience into the story without any background though if you’ve read the comics or follow information about the movie online you will have some idea of where the movie is going. Vers is a Kree operative sent with a team to another planet to find someone missing and during the mission they are attacked by the Skrulls, a group of shape shifting aliens. When Vers crashes on Earth the story really picks up as it becomes apparent that she is from Earth but has no memories about what happened to her or her past. Ultimately, Captain Marvel is a movie about a woman realizing that she has power, coming into her own and understanding the power that she has. Though I think that the movie is for everyone there are instances that I feel women will understand better because they speak to real life situations that women find themselves in.

The acting is great, I believed everyone in the roles that they had. The movie has funny moments it’s not as comedic as some of the other MCU movies. I personally liked the story and I loved that we get some information about how the Shield that we know from the other movies was born.

Though Captain Marvel is an origin movie set in the 90’s at this point Marvel Studios does kind of expect you to have seen at least some of the other movies as there are instances that things such as Shield are not explained as it is assumed that you know this information. However, it is a movie that can be watched without knowledge of the others since it is only the calls backs and foreshadowing to other movies that might be missed. Since the movie is set in the 90’s there are major references and jokes made about the 90’s that if you are not familiar with they might not connect. Stay through the credits as there is a scene that connects directly to the Avengers: Infinity War and Endgame.

Overall, not the greatest Marvel movie but a good story with great characters that give us something good before what I feel will be the devastation to come with Avengers: Endgame.

One thought on “Captain Marvel Review”