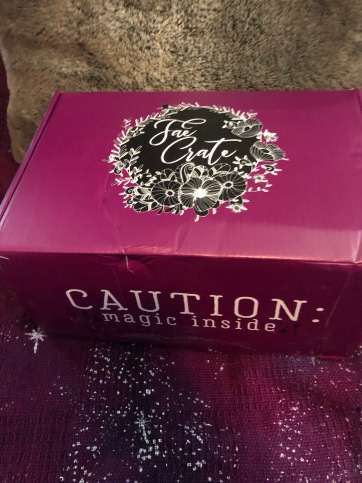 So in March I decided to try a new book subscription box which was Fae Create’s anniversary box. Fae Crate is a young adult book subscription box that focuses on fantasy and science fiction. Unlike some book boxes Fae Crate has three options to choose from: a shirt only box (Solitary Crate), a book and goodies box (Unseelie Crate), and a box that includes the shirt, book, and all the bookish goodies (Seelie Crate). For my first box I choose the Unseelie Crate without the shirt as I do have trouble ordering clothes online sometimes due to my height and body shape. 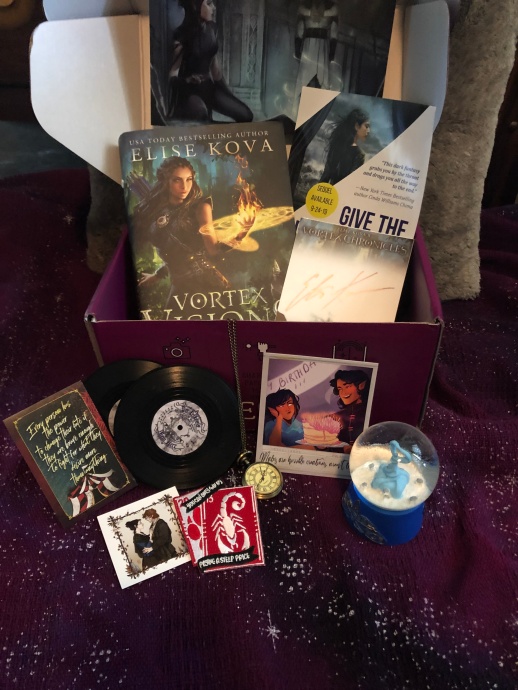 Sadly, I was a little disappointed with this box especially since it was their one year anniversary box. The smaller bookish goodies in the box where an iron on patch inspired by the Winner’s Curse, a record coaster set inspired by Wintersong, an Outlander magnet, a Caraval book sticker and an art Polaroid from A Court of Thrones and Roses. The two bigger items besides the book where a Snow globe inspired by A Muse of Nightmares and a Watch necklace from the book series Air Awakens. To me while none of these items where bad, most of them felt cheep and like they were trying to find things to fill the box with. Which I don’t like given Fae Crate is more expensive than some of the other book boxes.

The book is Vortex Visions by Elise Kova which has a beautiful dust jacket and art work on the inside of it as well as an embossed cover. The story follows Vi Solaris who is the heir to an Empire she doesn’t know and wants to reunite with her family.  With powers she shouldn’t have and can’t control she meets a stranger that might be able to help her and save the world. I have never heard of this book before but it sounds interesting. Fae Crate does seem to include books that are not the most hyped so if your trying to find new books people might not be talking about this might be the box for you. Also Fae Crate does include a eBook download in each months box which adds more value when the items might not be the best. This months eBook was The Body Electric by Beth Revis. 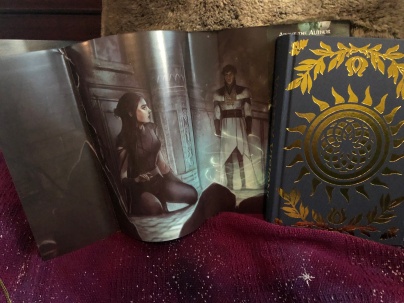 For those interested Fae Crate does special book “hangover” recovery boxes for some popular and highly anticipated books throughout the year as well as monthly boxes. For me, I have bought a hangover crate but not any more of the monthly boxes as none of them have peaked my interest again.