Owl Crate is a young adult book subscription box where every month you receive one new hardcover book and an assortment of bookish goodies connected to the monthly theme. Some of these items are very practical and some are better suited as decor or for a pin/builtin board. September’s theme is A Glorious Haunting.

Each box includes different bookish goodies that fit the theme of the month and are connected to other books. This months items include a throw blanket that features the full text of Edgar Allan Poe’s The Raven which is very soft and I love. Other items included were a set of three skull spoons, a Sleepy Hollow inspired lip balm that smells like pumpkin spice, a Black Flame candle inspired by Hocus Pocus, and an enamel chain bookmark.

Every month Owl Crate has a new young adult hardback book that has an exclusive cover, is signed and comes with a letter from the author. The enamel pin that is in every box is also inspired by that months book. This months book is Horrid by Katrina Leno which also included exclusive artwork on the reverse of the dust jacket. The story follows Jane and her mother who move back to New England after her fathers death. But the house that they are living in might house more secrets and horrors than Jane was expecting.

October’s theme is Legends and Lore.

The Hollow Places by T. Kingfisher is an adult horror novel that is inspired by the 1907 novella by Algernon Blackwood, The Willows. The story follows Kara a recently divorced young woman who is working and living in her uncles small town museum full of old taxidermy and other oddities. One day a hole is busted into a wall in the museum which opens a door way to a different world of islands surrounded by willows with bunkers on some of the islands. When Kara and her friend, Simon, venture into the world they find a place that connects many worlds but house creatures that hear your thoughts and the more that you think of them the stronger and more deadly they become.

I received a copy of this book from NetGalley and I absolutely loved it. The writing is very good and Kingfisher created a amazing horror atmosphere that made me feel physically anxious and fearful for the characters. It one of those books that I had to stop reading at points because of how creepy and unsettling everything was but at the same time I wanted to keep reading to find out what happened next.

Kara is one of those characters that is written in a way that makes her feel very relatable and someone you want to root for. Simon is mostly there for some add comic relief during some of the most tense situations but I loved this quirky character. There were a few moments that I felt like the characters had to do things that in reality no one would do just to move the story and plot along but it didn’t take away from my enjoyment of the story. I would recommend this book to anyone interested in horror and those who love creepy stories.

Fairyloot is a Young Adult book subscription box focusing on fantasy based out of the UK. Each month you receive a new Young Adult hardback book and 5-6 bookish goodies. Like most book boxes the hardback are special editions and the items are a combination of both practical things and more decorative items. August’s theme is Let the Games Begin.

The bookish items included this month are a Nevernight bookmark, a golden egg bath bomb, an Aurora Rising pin, a notebook inspired by Stalking Jack the Ripper, a Scythe magnet, and An Ember In the Ashes book sleeve. Each month also includes two tarot card this month featuring Mia and Mr. Kindly from Nevernight.

All Fairyloot books come with exclusive covers and are signed by the author. The box also includes an author letter for each book. This months book is Star Daughter by Shveta Thakrar which also came with gold sprayed edges. The story is a contemporary fantasy inspired by Hindu mythology where a young woman is forced to be her celestial families human champion while also trying to save her father.

September’s theme is Under the Sea.

In August I didn’t read as much as I would have liked, only reading two books but both were five star reads. However, I did watch several movies which I will be reviewing in this Wrap Up.

Rolling in the Deep by Mira Grant is a horror novella that I have reread multiple times and have a full review for. The only thing I will say about it is it follows a group of scientists that are searching for mermaids and find them. I love this story and expect that I will reread it and the sequel novel again and again.

The other book I read this month was Gideon The Ninth by Tasyn Muir. This is a science fiction/fantasy novel about lesbian necromancers in space. Though it is so much more than that and its very hard to describe. I would recommend checking out my full review of the book. Its a new favorite and I can’t wait to read the next book in the series.

Crawl is a disaster movie where a young woman goes to check on her dad who’s house in Florida is in the path of a Category 5 Hurricane. While finding her dad, Alligators are in their basement trying to catch them and they must work together to make it out alive. I watched this one day when I didn’t want to think about what I was watching. The movie is good but like many disaster movies it focuses more on the spectacle than on a story or plot.

47 Meters Down: Uncaged is a survival horror movie that is technically the sequel to 47 Meters Down but none of the characters of the first movie appear in the sequel. The story follows a group of teenagers who decide to go underwater cave diving in a newly discovered Mayan ruins however when the girls get spooked and cause a cave in they must attempt to survive shark attacks by sharks that have learned to survive in complete darkness. A kind of campy shark movie that is great for those times that you don’t want to have to focus on the plot to understand what is going on.

Jumanji: Welcome to the Jungle is the direct sequel to the 1995 Jumanji movie staring Robin Williams. Instead of being sucked into a board game and having to win to make everything go back to normal a group of teenagers during detention find an old video game that they get sucked into which they must survive and beat to return home. I love the original Jumanji movie and it was a childhood favorite. This new movie while very different is also very good. I love the actors and the part where the teenagers are inhabiting the bodies of the video game characters. I would give the movie a watch if you haven’t seen it yet.

Owl Crate is a young adult book subscription box where every month you receive one new hardcover book and an assortment of bookish goodies connected to the monthly theme. Some of these items are very practical and some are better suited as decor or for a pin/builtin board. August’s theme is Written in the Stars. 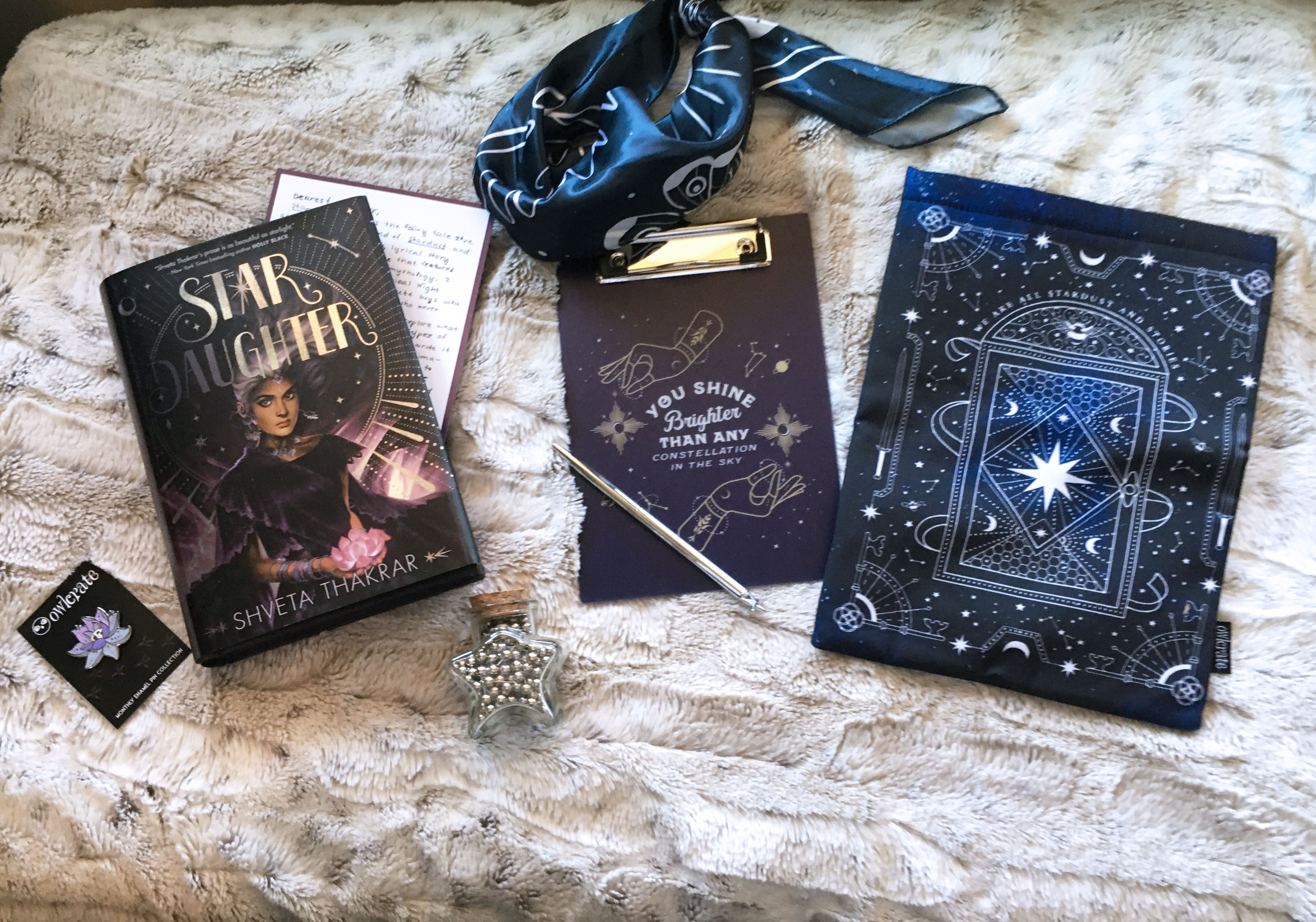 Each box includes different bookish goodies that fit the theme of the month and are connected to other books. This months items include a star shaped bottle with sliver push pins, a Strange the Dreamer bandana, a pen with a star on top, a Starless Sea book sleeve, and an Aurora Rising inspired clipboard. 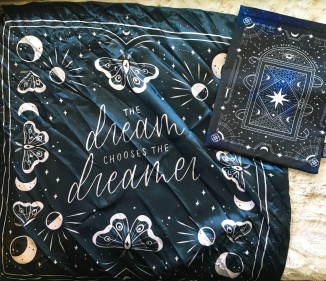 Every month Owl Crate has a new young adult hardback book that has an exclusive cover, is signed and comes with a letter from the author. The enamel pin that is in every box is also inspired by that months book. This months book is Star Daughter by Shveta Thakrar which also has purple sprayed edges. The book is a Hindu inspired fantasy where a young woman is sent on a quest to be the human champion of her celestial family and decide which house will be the next ruler of the heaven while saving her father.

September’s theme is A Glorious Haunting.

Gideon the Ninth by Tamsyn Muir is an Adult Scifi/Fantasy novel. The story is very hard to explain but its amazing. What I heard about the book was that it was lesbian necromancers in space and that was all I needed to know to pick it up but its much more than that.

The world is set up where there are nine houses on nine different planets with each house focusing on aspect/power of necromancy. The Emperor has invited each houses main necromancer and their swordsman to join in a competition to become an elite member of the Emperors court. The story starts out with Gideon who is an orphan raised in the Ninth House attempting to leave and join the army. However, when Harrowhark Nonagesimus, Reverend Daughter of the Ninth House kicks her ass Gideon must help Harrow win or the Ninth House will die.

The story drops you straight in and you pick up what really going on as you read. For me there was a lot of things that I didn’t get or understand initially but the relationship between Gideon and Harrow keeps the story flowing and convinces you to read on.Though I feel like this is one of those books that you will understand more with each reading.

I love the banter between them as a times they just seem to hate each other but you know there is more to it. The ending was shocking and amazing and felt like my heart was being ripped out. This is one of my new favorite books and I can’t wait to read the sequel.