During December I read 3 books and started and finished one PlayStation 4 game. Three books doesn’t sound like a lot in comparison to what I’ve read in some months but I felt good about what I read and with the holidays I spent a lot of time with my family so the numbers don’t matter.

The first book I read and finished was The Romanov Sisters by Helen Rappaport. As a historian I try to read a few nonfiction history books each year thought I primarily read for fun these days. The Romanov Sisters follows the lives of the last four Grand Duchesses of Russia: Olga, Tatiana, Maria, and Anastasia Romanov from their births till their deaths during the Russian Revolution. Helen Rappaport weaves their story in a way that makes it feel like your not reading a boring account of history which I hope more historians are able to do. She includes all the relevant information and quotes from the girls letters that show case how bright and wonderful these young women were who died to young. I feel like the reader doesn’t need to know much if anything about Russian history to enjoy the book but those who like to read history or nonfiction could get more out of it. Though an enjoyable and well researched book I did feel like it started to drag a bit when the timeline got to World War I as the lives of the Romanov’s become much more restricted and not as interesting to read about. Overall I feel like this is a history book written for everyone and I gave it 3/5 stars.

The second book I finished in December was Parasite by Mira Grant (aka Seanan McGuire) where in the year 2027 sickness and disease have been eradicated by everyone caring a genetically engineered tape worm create by SymboGen. The story follows Sally Mitchel who nearly died six years ago but was saved by the SymoboGen tape worm. However, things are starting to go wrong with the tape worms and people are not acting like they should so Sally must figure out what is going on and her new place in the world. If you have any anxiety or fears based around medical events or parasites/bugs I would consider not reading this series.  I absolutely loved the NewsFlesh series and have loved many of Seanan McGuire’s other work so I was expecting to love this book. However, the book starts out strong I started to lose enjoyment while reading about half way though as there is a major plot twist that I couldn’t really get behind. Seanan McGuire’s endings though, especially in her science fiction horror books feel like a gut punch or that didn’t just happen, did it?  Its nothing that I ever expect and it always causes me to want to read more. So, I do plan on continuing the series but I don’t think I will love it as much as some of her other series. For this first book I gave it 3.5/5 stars.

The final book I read was Doctor Who: Twelve Doctors of Christmas. I’ve loved Doctor Who for years now and while I don’t read many of the books there are some gems out there. Twelve Doctors of Christmas is a collection of short stories featuring each of the twelve Doctors and stories set around or on Christmas Day. The book is structured with one story and illustration for each Doctor. I feel those who have seen at least a few episodes from each Doctor will get the most enjoyment out of the stories but even if you have only gotten into Doctor Who recently there is something for everyone. All twelve stories are well written, cute stories focusing on the Doctor and Christmas that is best read during the holiday season. I gave it 4/5 stars. 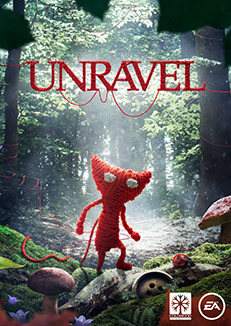 I started and finished the PlayStation 4 game Unravel in December. In Unravel you play as a little yarn guy, called Yarny, through a series of adventures in different locations from a families past. The story is told only though the animation,images, and the music as there is no dialogue in the entire game. As you play thought different levels such as a beach, winter landscapes, and farmland you complete puzzles and platforming sections that show you more of the story and the emotions of what you are seeing. Though the puzzles can be changeling, its amazing how much can be done without dialogue or much of the written word. I had a great time playing the game and I think I might play the squeal.