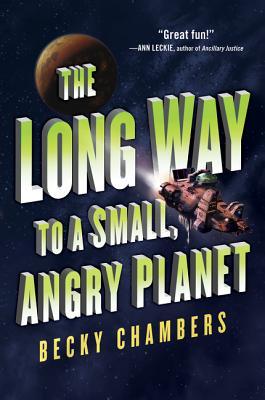 The Long Way to a Small, Angry Planet by Becky Chamber is the first book of the adult science fiction Wayfarers series. The story follows the crew of the tunneling ship Wayfarer as they take on a new crew member Rosemary Harper and the new jobs tunneling jobs that become available.

Tunneling ships create wormholes in space to connect different planet and locations. The crew of the Wayfarer is a culmination of different people and aliens that have become family to each other. The stories plot is that the Wayfarer as been given the job of creating a tunnel to a distant planet held by a race that just agreed to join the rest of the galactic society. However, the plot is not the main focus of the story the characters are.

Don’t read this if you’re wanting something where the plot is the focus. The characters are the important part of this story. The story is told through vignettes from the perspective of the different characters and crew members. They are a found family that might be different species but they love each other.

I absolutely loved this book. Though I love all different types of book some that focus more on the story than character and visa versa. However, this books strength lies in how well realized all these different characters are and their relationships to the rest of the crew. Everyone has their own history, story and some even secrets but they all are part of this big family that will do what ever they have to to keep each other together.